A race that could allow you to join the Sodebo crew for the Route du Rhum next November!

Sodebo and Virtual Regatta announce the launch of the E-Skipper Academy and the creation of a new virtual race on the North Atlantic record route, which will start on Virtual Regatta Offshore on Friday 24th June at 1pm. The objective of this unique operation, open to all, is to select the player who will take part in the Route du Rhum – Destination Guadeloupe on Virtual Regatta as the E-Skipper of Sodebo Ultim 3 and who will join Team Sodebo. This is a unique opportunity for the winner to live an exceptional experience by virtually setting off on the same course as Thomas Coville on November 6th, in the ultimate category of ocean racing: the Ultime Class.

In the footsteps of Thomas Coville on the North Atlantic 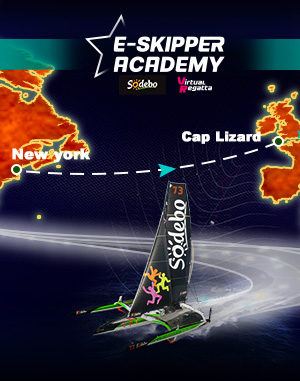 Thomas Coville will not be the only member of Team Sodebo on the Route du Rhum this year. Sodebo, which is strengthening its commitment to eSports, and Virtual Regatta have decided to create an additional bridge between virtual sailing and the physical world with the E-Skipper Academy.

The principle of the E-Skipper Academy is simple, with a mechanic in several stages: the competition, the selection, the preparation and the race.

The first stage will be played out on a virtual race whose course was not chosen by chance. Indeed, it echoes the North Atlantic solo record broken in 2017 by Thomas Coville in 4 days, 11 hours, 10 minutes and 24 seconds, a record that the first sailor to have gone under the five-day mark still holds. On the menu on Friday 24th June from 1pm: a sprint on the North Atlantic between New York and Lizard Point (southern tip of England) on which the participants will have the opportunity to compete against Team Sodebo. To pass this first selection phase, you will have to finish in the top 100. But also to explain their motivations by means of a form to be filled in before mid-July.

A jury will then select the best candidates during the summer on the basis of their eSports track record and their motivations. Like the sailors, the E-skipper will have to demonstrate their human qualities and their desire to share their adventure with as many people as possible.

A sporting and human adventure

The winner, whose name will be announced in September, will become a member of Team Sodebo. The human factor is therefore very important. In addition to exchanges with Thomas and the team, he will have the opportunity to attend the weather and routing points for the Route du Rhum, to visit the Team’s base in Lorient and the boat…

“We’re going to recruit an athlete who will join the team, represent us, challenge against many more boats than me. He will have a certain pressure. Our role will also be to put him in the best possible position to win or in any case to perform on Virtual Regatta during the Route du Rhum. I’ll have someone else with me who will be optimising, the same emulation. He will have a different vision of my sport and my activity. And a real strategic and tactical vision, which is one of the very important parameters for winning. I can’t wait to see what profile he or she will have. It’s a collaboration that could last for a long time.”

“Before Virtual Regatta, the public could only be spectators of the sailing races. Thanks to Virtual Regatta, they can become actors. We are witnessing the convergence of virtual sailing and sailing in the physical world. Our players are often sailing enthusiasts, sometimes sailors. Playing Virtual Regatta means sailing in a different way, with a different medium,” he says. Virtual Regatta is a game at the service of the sea, of sailing and of its players. With this operation, the beautiful story between Sodebo and its employees, Thomas Coville and Virtual Regatta continues. These links created from the beginning allow us to innovate together. I would like to thank them for their renewed confidence once again and I am very proud to be able to offer our players the opportunity to live such a unique experience with a team as prestigious, friendly and human as Team Sodebo. We will always try to offer them the best possible experiences to practice sailing in one way or another and to allow them to get closer to the champions, like Thomas Coville.”